Select a genre or scroll down to browse our staff picks!

Barbara is an avid reader who loves to chat about the books and authors with family, friends, and library visitors. She has worked at CCPL for 24 years and is currently manager of the LaPrade Library.  In addition to reading, Barbara enjoys genealogy, classic rock music, and every dog and cat she meets.

In medieval London, poet John Gower, is asked by his friend Geoffrey Chaucer to put his skills as an information broker to work to discover the source of a threat to King Richard II. In this book and its sequel The Invention of Fire, the author, who is a professor at UVA, provides an intriguing mystery true to the time and place. Fans of well-written period pieces featuring historical figures, such as Hilary Mantel’s Wolf Hall or Ken Follet’s Pillars of the Earth may want to give this a try. Plus, it has maps!

Kunta Kinte is an African man brought to America as a slave in the mid-1700’s and generations of his family that followed. Although this is a fictionalized account of the author’s genealogical research, the human story, the social justice implications, and the perspective on American history all contribute to make this book a worth one’s time. Yaa Gyasi’s  book Homegoing is another family saga that brings history to life. Amy Tan’s books describing Chinese immigrant experiences are also wonderful selections that expand horizons to other cultures.

All the Light We Cannot See

A French girl and German boy meet during World War II in occupied France and their lives intersect in an unusual way. Stories that take place in wartime are often heartbreaking or inspiring and this one is particularly moving. Read about Richmond in the American Civil War in Ginny Dye’s series, which starts with Storm Clouds Rolling In, or  Maisie Dobbs, by Jacqueline Winspear for a sassy, World War I-era mystery. 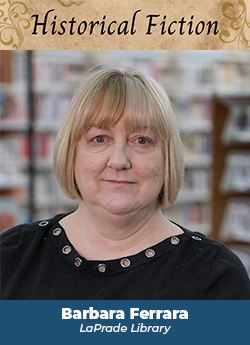 I am currently an Assistant Branch Manager at the Enon Library. Reading and working at the library are two of my favorite things to do! I get enough reality in my own life, so my favorite genre is one that lets me escape and take me to alternative realities which also helps me to think creatively about life in general. I love the horror genre - but not the apocalyptic kind - too realistic for my taste!

I loved this book long before it came out as the recent movie, and even long before the miniseries starring Richard Thomas of The Waltons fame was released in 1990! I can confidently say that the book is much, much better than either one - although I know that sounds cliche, it’s true! It’s a monster sized book, but if you’ve got a lot of time on your hands, it is absolutely worth it, I promise - also available as an e-book!

The Dark Tower: The Gunslinger

OK, bit of a cheat here, because this is more fantasy than horror, but there is definitely that King horror flavor to it. This is a mix of Western, Horror, Sci-Fi, and Fantasy, which shouldn’t work together, but absolutely does! And the good news is that if you like this one (try to stick through the book at least half way to give it time to grow on you), then you can follow it with the rest in the Dark Tower series: The Drawing of the Three; The Wastelands; Wizard and Glass; The Wind Through the Keyhole; Wolves of the Calla; The Song of Susannah; and the Dark Tower.

Koontz is very similar to Stephen King in his writing style which is why he’s my other go-to for horror. Odd Thomas is a young man who sees ghosts, but also has a personal need for justice which often leads him into strange situations with possibly frightening outcomes. If you fall in love with Odd Thomas like I did, there are eight other novels that follow his adventures!

Virginia is a diehard Firefly fan and manager of our library’s materials department (in that order).

A carefully researched and inspiring look at the importance of brave leadership, with ideas and practices you can put in place right away to improve your work environment.

The Secrets of Happy Families: improve your mornings, rethink family dinner, fight smarter, go out and play, and much more

In this book, the author reaches out to leaders in business, sports, technology and the military for advice on individual topics that lead to healthy family dynamics.  Find out what Warren Buffet thinks about allowances for kids and get advice from those who negotiate peace treaties so you can settle disagreements.  A break from the traditional family psychology book.    "

When: The scientific secrets of perfect timing

A study on the importance of timing and how to maximize the time we have.  Did you know that most people are more analytical in the morning and more creative in the afternoon, that most students perform better on tests if they are allowed a social break in the 30 minutes before starting the test? This book will help you navigate the endless stream of timing decisions we make every day.  A game changer. 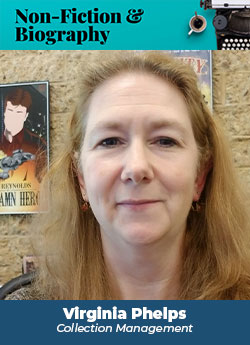 I’m the newest full time Librarian at North Courthouse Road branch. I used to be a school librarian. I have 2 children and a dog named Rosie.

Sometimes it takes someone with a different perspective to help us solve a problem even one like how to find pants for an octopus. Join our octopus friend on an adventure to find the perfect pair of pants.

Who knew a sale on pants for potatoes could cause so many problems? Will our hero be able to dodge the bully and get his stripey pair of potato pants? The book is full of humor and real life situations.

I loved the back and forth conversation as a young panda tries to convince his father of why he needs pants. It reminded me of several conversations I had with my kids when they were small. He is very persuasive! 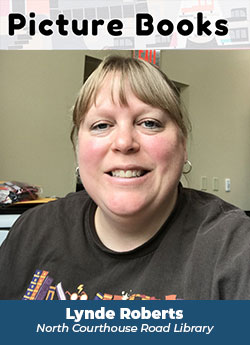 Kelly is a big fan of romance and science fiction books, and any tv shows involving spaceships or vampires. She loves to knit and is trying to figure out the whole sewing thing. In any remaining spare time she wanders through Richmond with her dog, Ripley Furriosa Woofstonecraft.

Get A Life, Chloe Brown (The Brown Sisters, #1)

It deals realistically with chronic illness! Chloe Brown, a brilliant, funny and cranky computer geek with fibromyalgia, falls for Red Morgan, a handyman/artist, in this sweet contemporary.

A Princess in Theory (Reluctant Royals, #1)

It’s a fast-paced historical novella with adventure and a high heat level! Martin is a freedman in London, Theodore is a writer and runs a publication where people place lonelyhearts ads. They end up working together trying to prevent a young heiress from running off to get married--and discover each other in the process! 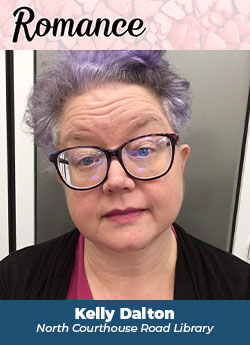 Branch Manager of the Meadowdale Library who enjoys art, baseball, family and friends.

IMHO Dune by Frank Herbert is not only the greatest science fiction book ever written but it is also one of the greatest books ever written.  Dune has been an influence on pop culture ever since it was first published in 1965.  It has everything you want in a story, it has war, romance, politics and sandworms.

Just like the title suggests this humorous story is all over the place while somehow remaining connected.  The prophet named Bokonon invites us to sing along with him.

I’m the Customer Service Supervisor at Meadowdale Library and I have loved libraries and books my whole life!  I previously worked as a library volunteer, Page, Library Assistant and Children’s Library Associate. I enjoy all kinds of books but lately I’m drawn to suspense.

Such a wonderful cast of characters and Moriarty is so skilled at bringing them all to life. The book tackles some serious topics (domestic abuse, assault, divorce) but what stays with you is the strength of the female relationships. It’s not all serious, there’s humor too; some parts had me laughing out loud!

I loved this book and finished it in one night because I had to know the ending. Two women meet when one finds the other’s wallet. One of them is excited to have met a new and glamorous friend, but what does the other woman want? Something sinister is going on and you’ll find yourself wishing you could warn her to just grab her kids and run. 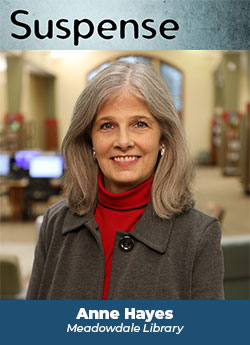 Hello, my name is Rose Marie Green and I am the Branch Manager at Clover Hill Library. Even without the glasses, I am a quintessential librarian - I love nothing better than curling up with a good book, a piping hot cup of tea, and snuggling with my cat. I read a wide variety of genres but my favorites are fantasy and mysteries with the odd historical fiction or romance thrown in there.

Terrier is the first book in my favorite series by Tamora Pierce, an incredible fantasy author who was one of the first to celebrate strong heroines as far back as the 1980s. This is the beginning of Beka’s journey to become a "Dog" and protect the people of the Lower City. Quiet but capable, Beka uses her unique magical talent of hearing the words of the dead on the back’s of pigeons to stop the murderous intentions of a rising threat. This title is also available as an ebook or eaudiobook through CCPL’s Overdrive.

The first in a new series that takes place in the world of Buffy the Vampire Slayer. Nina and Artemis are twins raised in the Watcher’s Academy. When Nina, the gentle healer, is unexpectedly Chosen to be a Slayer, she isn’t sure this is direction she wanted her life to go. As Nina hones her skills with her Watcher-in-training, Leo, there’s plenty to keep her occupied: a monster fighting ring, a demon who eats happiness, a shadowy figure that keeps popping up in Nina’s dreams… But it’s not until bodies start turning up that Nina’s new powers will truly be tested—because someone she loves might be next.

The first book in a murder mystery series by the amazing Jennifer Lynn Barnes. The Naturals program brings together teens who have advanced "natural" capabilities to solve cold cases. But each of these teens is damaged in some way or another. When one of their cases manifests in the present, the team is going to have to pull together to find the murderer. A little bit of romance, deep psychological scars, and a big mystery kept me enthralled until the very end. This title is also available as an ebook through CCPL’s Overdrive. 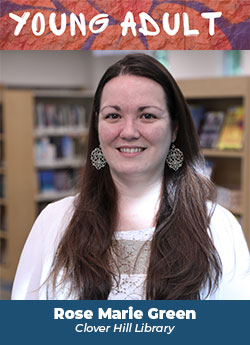